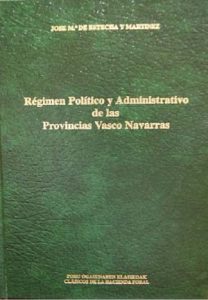 As the subtitle states, the work is a “Collection of Laws, Decrees, Royal Orders and Resolutions of the Contentious-Administrative Court”, a very complete compilation of legal texts that contributed to the definition of the state of the economic-administrative question, at a time of construction of the new state building and in a subsidiary way of the fiscal self-administration regime of some Territories that, after the Law of July 21, 1876, were practically without legal coverage.
Download complete pdf (1221 Pages) 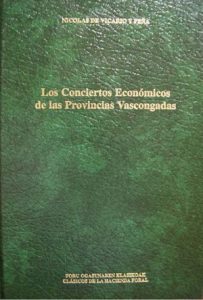 The work elaborates a meticulous compilation of the detailed regulations through which, starting from the Law of 1876, the legal regime of the Economic Agreement was configured, together with the systematized and reliable testimony of the opinions, attitudes and positions regarding the Agreement of many of the authors and personalities who had a decisive influence or who played a leading role in those first attempts to recover the financial autonomy and capacity of self-organization of the provincial political and administrative regime.
Download complete pdf (625 Pages) 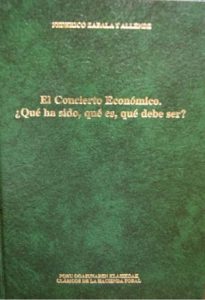 This is an essentially informative and practical book, aimed at clarifying and fixing ideas on the Economic Agreement or, in the author’s words, “to spread its justice and convenience”, which is structured in parts that the author himself clarifies in its title: the economic agreement (previous definition), what it has been (evolution), what it is (last agreement of 1925-26) and what it should be (projection of the system towards the future).
Download complete pdf (299 Pages) 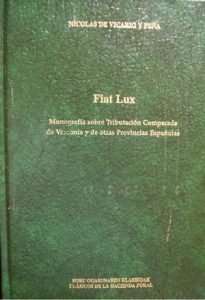 It is a work presented to the competition for monographs organized by the Provincial Council of Biscay in 1921 to prepare the renewal of the Agreement scheduled for 1926, in which a comparative study of the Basque taxation and that of other Spanish provinces is made, structured in three parts: the first part shows what the taxation has been in the foral times; the second, what the agreed regime was at the time the work was written, and the third, what, according to the author, it should be in the future.
Download complete pdf (452 Pages) 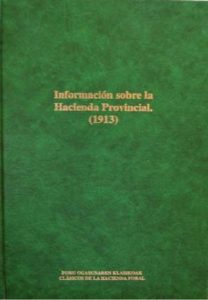 This volume is not a single work by a single author, but rather a compilation of three booklets with contributions from different sources but with a common theme, referring not to the basis of the agreed regime but to the different alternatives for the effective exercise of the fiscal sovereignty derived from it, in response to the consultation that the Provincial Council raised, at the initiative of Indalecio Prieto, on the reform of the tax system.
Download complete pdf (223 Pages) 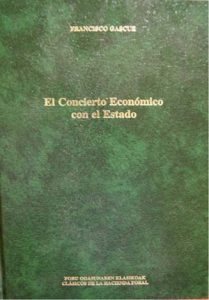 It is a work whose content deals with the fiscal effort of Gipuzkoa. From its contents, it is remarkable how, after more than a century, there are some debates of unquestionable validity, such as the one corresponding to the municipal budgets, or the very scope of the Economic Agreement and the Quota.
Download complete pdf (220 Pages) 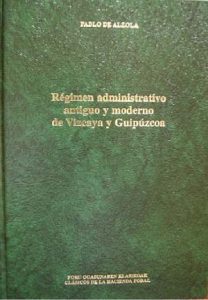 At a time when the debate on the direct contribution is taking place, the author goes to the original documentary sources in order to verify the historical foundations of the conflicting positions regarding the possibility of the Diputaciones Forales maintaining a tax system different from that of the State. This book also contains a biographical profile of the author as he is one of the leading figures in the analysis of the economic and administrative reality of the Economic Agreement at that time.
Download complete pdf (489 Pages) 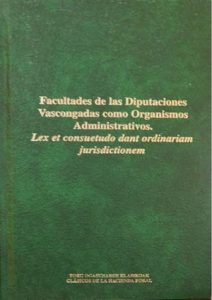 This work, as the one published with the number four of the series by Nicolás Vicario, comes from the same initiative, from a competition of monographs organized by the Provincial Council of Biscay in 1921 with the aim of having a basis for what was supposed to be a close negotiation of the renewal of the 1926 Agreement. Its content does not deal strictly speaking with the Agreement, but it systematizes the competences that the County Councils maintained in the administrative field.
Download complete pdf (860 Pages)